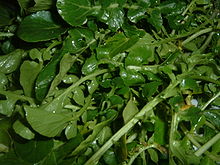 Watercresses are fast-growing, aquatic or semi-aquatic, perennial plants native from Europe to central Asia, and one of the oldest known leaf vegetables consumed by human beings. These plants are members of the Family Brassicaceae or cabbage family, botanically related to garden cress and mustard — all noteworthy for a peppery, tangy flavour.

Watercress is often used in sandwiches, such as those made for afternoon tea. It contains significant amounts of iron, calcium and folic acid, in addition to vitamins A and C. In some regions watercress is regarded as a weed, in other regions as an aquatic vegetable or herb.

Retrieved from "https://healthyrecipes.fandom.com/wiki/Watercress?oldid=10088"
Community content is available under CC-BY-SA unless otherwise noted.