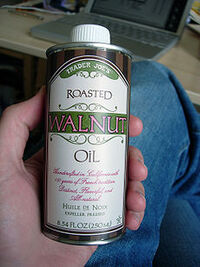 Walnut oil is edible and is generally used less than other oils in food preparation, often due to high pricing. It is light-coloured and delicate in flavour and scent, with a nutty quality. Although sometimes used for pan frying, most chefs do not use walnut oil for high temperature cooking, as heating can remove some of the oil's flavour & nutrition and produce a slight bitterness; instead it is used primarily as an ingredient in cold dishes such as salad dressings, where its flavour more easily comes through. In addition, the antioxidants present in the oil are easily destroyed in cooking. Most walnut oil is produced in France, though there are also producers in Australia, New Zealand and California.

Walnut oil is a good source of omega-3 fatty acids which are essential to human nutrition.

Retrieved from "https://healthyrecipes.fandom.com/wiki/Walnut_Oil?oldid=8957"
Community content is available under CC-BY-SA unless otherwise noted.