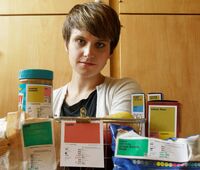 Recently there have been many changes to try to make Americans healthier. First there was changing the Food Pyramid to My Food Plate, and now the Food and Drug Administration is attempting to recreate the nutritional labels to give more information to consumers.

The new proposal will increase the visibility of accurate serving sizes and calories and a diminished emphasis on daily percent values for things like fat, sodium, and carbohydrates. This proposal has been in the works since 2003, but with the Obama administration's pressures on this issue they are focusing more intently on it.

Michael Taylor, FDA Deputy Commissioner, states "There's no question obesity is a central public health concern that the nutrition facts panel can play a role in. It's obviously not a magic wand but it can be an informative tool"

The new proposal for the labels are attempting to better reflect a reality. For example, instead of a 20 oz bottle saying 2.5 servings, it provides the caloric information for the whole bottle.

Some people believe that these new changes aren't enough and that there should be even more information on packaging and nutritional labels (as can be seen in the new label proposals in the photo).

What are your opinions on this hot topic?

Retrieved from "https://healthyrecipes.fandom.com/wiki/User_blog:Wagnike2/FDA_Crafting_New_Nutrition_Labels?oldid=11058"
Community content is available under CC-BY-SA unless otherwise noted.