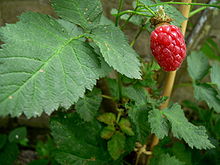 The Tayberry is a cultivated shrub in the genus Rubus of the family Rosaceae patented in 1979 as a cross between a loganberry and the black raspberry. It was developed at the Scottish Crops Research Institute, Invergowrie, Scotland, by Derek Jennings and David Mason. The fruit is sweeter, much larger, and more aromatic than that of the loganberry, itself a blackberry and red raspberry cross.

Named after the river Tay in Scotland, the tayberry is grown for its edible fruits which can be eaten raw or cooked to make jam or other dishes, with a cropping period from early July to mid-August. Unfortunately, tayberries do not pick easily by hand and cannot be machine harvested, so they have not become a commercially grown berry crop.

Retrieved from "https://healthyrecipes.fandom.com/wiki/Tayberry?oldid=8688"
Community content is available under CC-BY-SA unless otherwise noted.