Rose water or rose syrup is the hydrosol portion of the distillate of rose petals. Rose water, itself a by-product of the production of rose oil for use in perfume, is used to flavour food, as a component in some cosmetic and medical preparations, and for religious purposes throughout Europe and Asia.

Rose perfumes are made from rose oil, also called attar of roses, which is a mixture of volatile essential oils obtained by steam-distilling the crushed petals of roses, a process first developed in Persia and Bulgaria. Rose water is a by-product of this process. 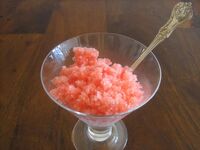 Rose water has a very distinctive flavour and is used heavily in Iranian cuisine—especially in sweets. For example, rose water is used to give gulab jamuns and some types of loukoum (or "Turkish Delight", "Cyprus Delight") their distinctive flavours. The Cypriot version of mahalebi uses rosewater. In Iran it is also added to tea, ice cream, cookies and other sweets in small quantities, and in the Arab world and India it is used to flavour milk and dairy-based dishes such as rice pudding. It is also a key ingredient in sweet lassi, a drink made from yoghurt, sugar and various fruit juices, and is also used to make jallab. In Malaysia and Singapore, rose water is mixed with milk, sugar and pink food colouring to make a sweet drink called bandung. Rose water is frequently used as replacement for red wine and other alcohols in cooking by Muslim chefs.

In Western Europe, rose water (as well as orange flower water) is sometimes used to flavour both marzipan and madeleine, a petite scallop-shaped French sponge cake. Rose water was also used to make Waverly Jumbles, a type of cookie much favoured by the American President James Monroe. American and European bakers enjoyed the floral flavouring of rose water in their baking until the 19th century when vanilla flavouring became popular.

The French are known for their rose syrup, most commonly made from an extract of rose petals. In the United States, this French rose syrup is used to make rose scones and marshmallows. Rose water was first produced by Muslim chemists in the medieval Islamic world through the distillation of roses, for use in the drinking and perfumery industries.

Rose water is used during the podium celebration of the Bahrain and Abu Dhabi Grands Prix instead of the traditional champagne, due to the prohibition of alcohol consumption in Islamic countries.

Retrieved from "https://healthyrecipes.fandom.com/wiki/Rosewater?oldid=8813"
Community content is available under CC-BY-SA unless otherwise noted.