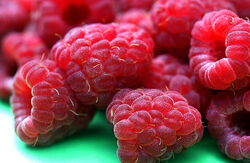 The raspberry is the edible fruit of a multitude of plant species in the genus Rubus, most of which are in the subgenus Idaeobatus; the name also applies to these plants themselves. Raspberries are perennial. The name originally referred to the European species Rubus idaeus (with red fruit), and is still used as its standard English name.

Raspberries contain significant amounts of polyphenol antioxidants such as anthocyanin pigments linked to potential health protection against several human diseases. The aggregate fruit structure contributes to its nutritional value, as it increases the proportion of dietary fiber, placing it among plant foods with the highest fiber contents known, up to 20% fiber per total weight. Raspberries are a rich source of vitamin C, with 30 mg per serving of 1 cup (about 50% daily value), manganese (about 60% daily value) and dietary fiber (30% daily value). Contents of B vitamins 1-3, folic acid, magnesium, copper and iron are considerable in raspberries.

Raspberries rank near the top of all fruits for antioxidant strength, particularly due to their dense contents of ellagic acid (from ellagotannins), quercetin, gallic acid, anthocyanins, cyanidins, pelargonidins, catechins, kaempferol and salicylic acid. Yellow raspberries and others with pale-colored fruits are lower in anthocyanins.

Due to their rich contents of antioxidant vitamin C and the polyphenols mentioned above, raspberries have an ORAC value (oxygen radical absorbance capacity) of about 4900 per 100 grams, including them among the top-ranked ORAC fruits. Cranberries and wild blueberries have around 9000 ORAC units and apples average 2800

Examples of raspberry species in subgenus Idaeobatus include: