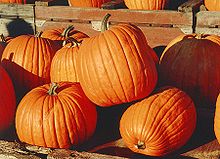 A Pumpkin is a gourd-like squash of the genus Cucurbita and the family Cucurbitaceae (which also includes gourds). They typically have a thick, orange or yellow shell, creased from the stem to the bottom, containing the seeds and pulp.

Pumpkins are very versatile in their uses for cooking. Most parts of the pumpkin are edible, including the fleshy shell, the seeds, the leaves, and even the flowers. In the United States, pumpkin is a very popular Halloween and Thanksgiving staple. Although most Americans use store-bought canned pumpkin,[citation needed] homemade pumpkin purée can serve the same purpose. A can of pureed pumpkin, typically used as the main ingredient in pumpkin pie.

When ripe, the pumpkin can be boiled, baked, steamed, or roasted. In Mexico and the U.S., the seeds are often roasted and eaten as a snack.

Retrieved from "https://healthyrecipes.fandom.com/wiki/Pumpkin?oldid=8937"
Community content is available under CC-BY-SA unless otherwise noted.