Plantain is the common name for herbaceous plants of the genus Musa. The fruit they produce is generally used for cooking, in contrast to the soft, sweet banana (which is sometimes referred to as the dessert banana). There is no formal botanical distinction between bananas and plantains, and the use of either term is based purely on how the fruits are consumed. 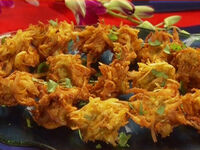 The population of North America was first introduced to the fruit as banana plantain, and in the United States and Europe "banana" generally refers to that variety. The word "banana" is sometimes used to describe other plantain varieties, and names may reflect local uses or characteristics of varieties: cooking plantain, banana plantain, beer banana, bocadillo plantain, etc.

Plantains tend to be firmer and lower in sugar content than dessert bananas. Bananas are most often eaten raw, while plantains tend to be cooked or otherwise processed, and are used either when green or unripe (and therefore starchy) or overripe (and therefore sweet). Plantains are a staple food in the tropical regions of the world, treated in much the same way as potatoes and with a similar neutral flavour and texture when the unripe fruit is cooked by steaming, boiling or frying. Regions with plantain crops include the Southern United States, Mexico, Puerto Rico, Hawaii, the Caribbean, Central America, Bolivia, Peru, Ecuador, Colombia, Southern Brazil, the Canary Islands, the countries surrounding the Mediterranean Sea, Madeira, Egypt, Cameroon, Ghana, Ivory Coast, Nigeria, Uganda, Rwanda, Okinawa, Taiwan, Thailand, India, Indonesia, Malaysia, the Philippines, the Pacific Islands and northern Australia. Farmers grow plantains as far north as Northern California and as far south as KwaZulu-Natal.

Retrieved from "https://healthyrecipes.fandom.com/wiki/Plantain?oldid=8805"
Community content is available under CC-BY-SA unless otherwise noted.