The Olive is a species of a small tree in the family Oleaceae, native to the coastal areas of the eastern Mediterranean Basin (the adjoining coastal areas of southeastern Europe, western Asia and northern Africa) as well as northern Iran at the south end of the Caspian Sea. Its fruit, also called the olive, is of major agricultural importance in the Mediterranean region as the source of olive oil. The tree and its fruit give its name to the plant family, which also includes species such as lilacs, jasmine, Forsythia and the true ash trees (Fraxinus). The word 'oil' in multiple languages ultimately derives from the name of this tree and its fruit. 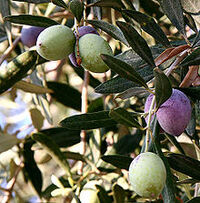 Olives are sometimes preserved in salt and sold in brine, those salted olives are likely cheaper than fresh olives. Half a cup of black olives give you 0.735grams of sodium, that's roughly a third of a teaspoon and a large part of the 2.3 grams of sodium recommended for healthy adults. (Incidentally African Americans, people over 50 and patients with heart disease or high blood pressure should limit themselves to 1.5 grams of sodium.) Green olives contain more sodium. [1]

You can add small amounts of salty olives or other very salty ingredients to soups or stews, then the salt from the ingredient will flavour the dish. If you do that you don't add further salt. if you can't resist eating too many salty olives once you've got them they may be best left on the supermarket shelf. Olive oil gives you many of the healthy nutrients in olives without any salt.

Retrieved from "https://healthyrecipes.fandom.com/wiki/Olives?oldid=18084"
Community content is available under CC-BY-SA unless otherwise noted.