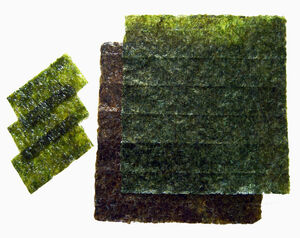 Nori (Japanese: 海苔), known in Chinese as hǎitái (海苔) and in Korean as kim or gim (김), is the Japanese name for various edible seaweed species of the red alga Porphyra including most notably P. yezoensis and P. tenera. The term nori is also commonly used to refer to the food products created from these so-called "sea vegetables".

Nori is commonly used as a wrap for sushi makizushi and rice balls onigiri. It is also a common garnish or flavoring in noodle preparations and soups. Nori is most typically toasted prior to consumption ("yaki-nori" in Japanese). A very common and popular secondary product is toasted and flavored nori ("ajitsuke-nori" in Japanese), in which a flavoring mixure (variable, but typically soy sauce, spices and sugar in the Japanese style or sesame oil and salt in the Korean style) is applied in combination with the toasting process. Nori is also eaten by making it into a soy sauce flavored paste noritsukudani (海苔佃煮; in Japanese).

Nori is sometimes called laver in English, and laver is eaten as laverbread in a savory oatmeal in Wales and Ireland. Laver usually applies to plants of the genus Porphyra and not to the finished edible sheets of nori. The English term is not well known, and in the US, the term nori is more common.

A related product, prepared from the unrelated green algae Monostroma and Enteromorpha, is called aonori (青海苔; in Japanese, literally green nori), and is used like herbs on everyday meals like okonomiyaki and yakisoba.

Retrieved from "https://healthyrecipes.fandom.com/wiki/Nori?oldid=10019"
Community content is available under CC-BY-SA unless otherwise noted.