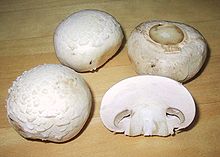 Agaricus bisporus—known variously as the common mushroom, White mushroom, champion mushroom, paris mushroom, or when mature, the Portobello mushroom— is an edible basidiomycete mushroom native to grasslands in Europe and North America. Agaricus bisporus is cultivated in more than 70 countries and is one of the most commonly and widely consumed mushrooms in the world.

Most mushrooms that are sold in supermarkets have been commercially grown on mushroom farms. The most popular of these, Agaricus bisporus, is generally considered safe for most people to eat because it is grown in controlled, sterilized environments, though some individuals do not tolerate it well. Several varieties of A. bisporus are grown commercially, including whites, crimini, and portobello. Other cultivated species now available at many grocers include shiitake, maitake or hen-of-the-woods, oyster, and enoki. In recent years increasing affluence in developing countries has led to a considerable growth in interest in mushroom cultivation, which is now seen as a potentially important economic activity

There are a number of species of mushroom that are poisonous, and although some resemble certain edible species, consuming them could be fatal. Eating mushrooms gathered in the wild is risky and should not be undertaken by individuals not knowledgeable in mushroom identification, unless the individuals limit themselves to a relatively small number of good edible species that are visually distinctive. A. bisporus contains carcinogens called hydrazines, the most abundant of which is agaritine. However, the carcinogens are destroyed by moderate heat when cooking.

Mushrooms are a low-calorie food usually eaten raw or cooked to provide garnish to a meal. Raw dietary mushrooms are a good source of B vitamins, such as riboflavin, niacin and pantothenic acid, and the essential minerals, selenium, copper and potassium. Fat, carbohydrate and calorie content are low, with absence of vitamin C and sodium.

Retrieved from "https://healthyrecipes.fandom.com/wiki/Mushrooms?oldid=10017"
Community content is available under CC-BY-SA unless otherwise noted.