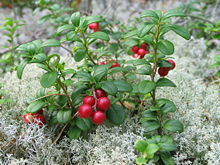 Lingonberry is a short evergreen shrub in the heath family that bears edible sour fruit, native to boreal forest and Arctic tundra throughout the Northern Hemisphere from Eurasia to North America. It is seldom cultivated, but fruit is commonly collected in the wild.

The berries collected in the wild are a popular fruit in northern, central and eastern Europe, notably in Scandinavia, the Baltic states, Germany, Austria, Switzerland, Czech Republic, Poland, Slovenia, Slovakia, Romania, Russia, and Ukraine. In some areas they can legally be picked on both public and private lands in accordance with the freedom to roam.

The berries are quite tart, so they are almost always cooked and sweetened before eating in the form of lingonberry jam, compote, juice, or syrup. The raw fruit are also frequently simply mashed with sugar, which preserves most of their nutrients and taste. This mix can be stored at room temperature in closed but not necessarily sealed containers, but in this condition, they are best preserved frozen. Fruit served this way or as compote often accompany game meats and liver dishes. In Sweden and Norway, caribou and deer steak is traditionally served with gravy and lingonberry sauce. Preserved fruit is commonly eaten with meatballs and potatoes in Sweden and Norway, and also with pork.

A traditional Finnish dish is sautéed reindeer (poronkäristys) with mashed potatoes and lingonberries, either cooked or raw with sugar. In Finland, a porridge made from the fruit is also very popular. In Poland, the berries are often mixed with pears to create a sauce served with poultry or game. The berries can also be used to replace red currants when creating Cumberland sauce to give it a more sophisticated taste.