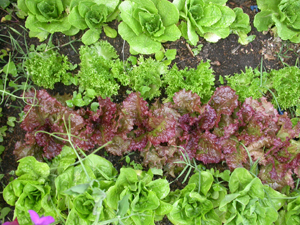 A lettuce plant has a short stem initially (a rosette growth habit), but when it blooms, the stem lengthens and branches, and it produces many flower heads that look like those of dandelions, but smaller. This is called bolting. When grown to eat, lettuce is harvested before it bolts.

This vegetable is widely popular throughout the world and is readily available in supermarkets year round with hundreds of varieties to choose from. Iceberg used to dominate the selections but other varieties are now moving to the forefront. Most domestic varieties are from California and imported lettuce typically arrives from Europe.

The lettuce that we see today, actually started out as a weed around the Mediterranean basin. Served in dishes for more than 4500 years, lettuce has certainly made its mark in history with tomb painting in Egypt and identification of different types of lettuces by various Greek scholars. Christopher Columbus introduced lettuce to the new world and from there, lettuce in the United States began cultivating.

There are four main types of lettuce and under each type there are different varieties.

Retrieved from "https://healthyrecipes.fandom.com/wiki/Lettuce?oldid=10003"
Community content is available under CC-BY-SA unless otherwise noted.