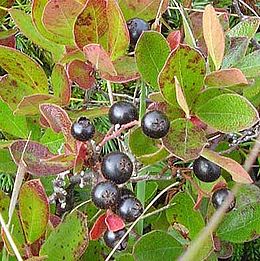 Huckleberry is a name used in North America for several plants in the family Ericaceae, in two closely related genera: Vaccinium and Gaylussacia. The huckleberry is the state fruit of Idaho.

The fruit of the various species of plant called huckleberry is generally edible. The berries are small and round, 5-10 mm in diameter and look like blue berries. Berries range in color according to species from bright red, through dark purple, and into the blues. In taste the berries range from tart to sweet, with a flavor similar to that of a blueberry, especially in blue- and purple-colored varieties. However, huckleberries have a noticeable, distinct taste different from blueberries.

Huckleberries are enjoyed by many mammals, including grizzly bears and humans.

Retrieved from "https://healthyrecipes.fandom.com/wiki/Huckleberry?oldid=8648"
Community content is available under CC-BY-SA unless otherwise noted.