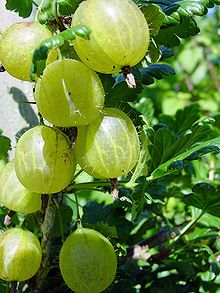 The gooseberry (pronounced /ˈɡʊzbəri/) is a species of Ribes, native to Europe, northwestern Africa and southwestern Asia.

Gooseberry bushes produce an edible fruit and are grown on both a commercial and domestic basis.

The gooseberry is a straggling bush growing to 1–3 metres (3–10 feet) tall, the branches being thickly set with sharp spines, standing out singly or in diverging tufts of two or three from the bases of the short spurs or lateral leaf shoots. The bell-shaped flowers are produced, singly or in pairs, from the groups of rounded, deeply-crenated 3 or 5 lobed leaves. The fruit of wild gooseberries is smaller than in the cultivated varieties, but is often of good flavour; berries' colour is usually green, but there are red variants and occasionally deep purple berries occur.

The easiest method of propagating gooseberries is by cuttings rather than raising from seed;cuttings planted in the autumn will take root quickly and can begin to bear fruit within a few years.

Vigorous pruning may be necessary; fruit is produced on lateral spurs and the previous year's shoots, so the 19th-century custom was to trim side branches in the winter, and perhaps trim leading shoots at that time or remove their tips in the summer.

Large berries can be produced by heavy composting, especially if the majority of the fruit is picked off while small to allow room for a few berries to continue to grow. Grafting of gooseberry vines onto ornamental golden currants (Ribes aurum) or other Ribes species can be helpful for this purpose.

Retrieved from "https://healthyrecipes.fandom.com/wiki/Gooseberry?oldid=8636"
Community content is available under CC-BY-SA unless otherwise noted.