Start a Wiki
Food & Tech: A Recipe for Better Eating 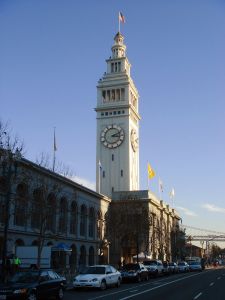 About the event
Can Technology Shape the Way We Eat?:

Learn how websites, blogs and apps have the power to influence and educate our food choices. Indulge in outdoor food tastings prepared by local chefs at the beautiful San Francisco Ferry Building. At 2pm, join Jimmy Wales, founder of Wikipedia, and our panel of speakers in an informative discussion on the power of food and technology.

Jimmy Wales is the founder of Wikipedia and co-founder of Wikia. Wales holds several degrees in finance and currently holds the board-appointed "community founder" seat on the Board of Trustees for the Wikimedia Foundation, the non-profit organization which operates Wikipedia. Wales co-founded Wikia with fellow Wikimedia trustee Angela Beesley in 2004.

Dean Ornish, M.D., is the founder and president of the non-profit Preventive Medicine Research Institute in Sausalito, California. He is also Clinical Professor of Medicine at the University of California, San Francisco. Dr. Ornish received his medical degree from the Baylor College of Medicine. The author of four New York Times' bestsellers, Dr. Ornish's most recent book, The Spectrum (2007), informs readers as to how to personalize their eating habits based on personal health goals, preferences, and needs.

Dr. Bill Pease is chief scientist at GoodGuide, the online service that rates products and companies by their health, environmental and social impact. GoodGuide currently rates 17,000 food products on their nutritional value. Bill is a PhD toxicologist who has taught risk assessment at UC Berkeley and worked for a variety of regulatory and non-profit organizations. Since his creation of Scorecard.org in 1998 he has been a leader in providing easy-to-understand, actionable information about toxic chemicals and environmental risks to the public using web-based tools.

Jane Goldman is the Editor in Chief of CHOW and also oversees the editorial and development teams for CHOW.com, an interactive media property for food and drink enthusiasts, and UrbanBaby, an online parenting resource. Prior to establishing the print version of CHOW, Goldman served as editor of The Industry Standard, the record-breaking magazine about business and technology. Her work has been featured in New York, Rolling Stone, Wired, Savvy, and Us. Goldman holds a law degree from Stanford and a degree in film production from NYU. Humberto Kam is Senior Manager of Online Communications for the Monterey Bay Aquarium, where he is responsible for many of the Aquarium's online initiatives, including the Seafood Watch website, social media as well as the organization's iPhone app. Prior to working at the Aquarium, Kam worked for The Walt Disney Company where he created games that bridged the online and theme park experiences. Kam holds a B.S. in Industrial Engineering from Texas A&M University and an MBA from The Pennsylvania State University.

Gil Penchina is a serial entrepreneur and CEO of Wikia.com, a top 100 web site that offers extensive content on topics ranging from Recipes to Lifestyle to Music, Games, Movies and more. The site now reaches 30mm unique visitors per month. Penchina is an active angel investor in companies such as Linkedin, Paypal, Flock, ZipRealty, Plusmo, Coveroo, SiteJabber as well as a variety of other consumer Internet services.

Laurine Wickett is chef and CEO of Left Coast Catering. A culinary veteran, Wickett is the epitome of a hands-on chef. Despite her administrative responsibilities, she prefers to be in the kitchen, working directly with all aspects of food production. Wickett's passion for food led to her being a 2009 participant on Top Chef: Las Vegas (Season 6).

John Silva is the chef and owner of San Francisco based Culinary Eye Catering and Events. For the last 13 years, Silva has worked in a variety of kitchen settings, ranging from large catering outfits in the South Bay, to small dive boat galley kitchens off the coast of Santa Barbara, to bistro restaurants in San Francisco. Silva's experience as a chef has convinced him that life’s best moments are spent around great food.

Laird Boles received his culinary arts degree from Johnson & Wales University, and apprenticed at the Charleston Grill (South Carolina) under Michelin Star Chef Bob Waggoner. During his tenure at the Charleston Grill, the restaurant received two nominations for the James Beard Award (the Oscars of the food world). Boles has participated in a variety of cooking competitions, including Orlando's Battle of the Parks, an Iron Chef-style throw down. Boles relocated to San Francisco in 2009 and held a Sous Chef position at San Francisco's Waterbar before joining Spire as Executive Chef.

Vincent Schofield is the former chef at Ebb & Flo. Known for his pressed sandwiches and creative entrees, Schofield has found a new home for himself as current head chef and owner of Darwin Cafe.

Claudine Dagit is the owner of Sugar & Spice Catering Company. A Bay Area native, Dagit believes in using food products that are not only healthy, but also humane and environmentally safe. Armed with a longtime passion for cooking, Dagit's business is based on the belief that the food we eat should come from the earth and not a factory. Sugar & Spice only uses foods that are locally grown.

Enter to Win Our Next Contest!
Leave a comment and tell us about your favorite dinner recipe for a chance to win $250 at Sur La Table. Visit the contest page for more details.

Retrieved from "https://healthyrecipes.fandom.com/wiki/Food_%26_Tech_Event?oldid=19210"
Community content is available under CC-BY-SA unless otherwise noted.