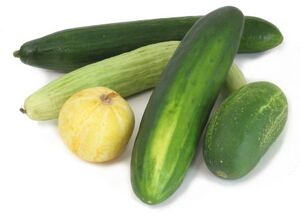 The cucumber (Cucumis sativus) is a widely cultivated plant in the gourd family Cucurbitaceae, which includes squash, and in the same genus as the muskmelon.

Cucumber plants bear blossoms as well as fruit. These blossoms are edible, but typically used as garnish only.

Cucumbers can be pickled for flavor and longer shelf life. As compared to eating cucumbers, pickling cucumbers tend to be shorter, thicker, less regularly-shaped, and have bumpy skin with tiny white- or black-dotted spines. They are never waxed. Color can vary from creamy yellow to pale or dark green. Pickling cucumbers are sometimes sold fresh as “Kirby” or “Liberty” cucumbers. The pickling process removes or degrades much of the nutrient content, especially that of vitamin C. Pickled cucumbers are soaked in brine or a combination of vinegar and brine, although not vinegar alone, often along with various spices. Pickled cucumbers are often referred to simply as "pickles" in the U.S. or "Gherkins" or "Wallies" in the U.K, the latter name being more common in the north of England where it refers to the large vinegar-pickled cucumbers commonly sold in fish & chip shops. (Although the gherkin is of the same species as the cucumber it is of a completely different cultivar).

Community content is available under CC-BY-SA unless otherwise noted.