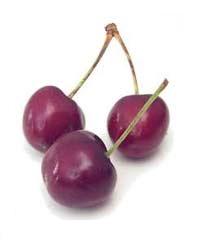 There are two main types of cherries: sweet and sour. Sour cherries are lower in calories and higher in vitamin C and beta carotene than sweet cherries.

A maraschino cherry is a preserved, sweetened cherry, typically made from light-colored sweet cherries, such as the Royal Ann, Rainier, or Gold varieties. The cherries are first preserved in a brine solution or ethanol, then soaked in a suspension of food colouring, sugar syrup, artificial and natural flavors, and other components. Maraschino cherries dyed red are typically almond-flavoured, while cherries dyed green are usually peppermint-flavoured.

Buy cherries that have been kept cool and moist, as flavor and texture both suffer at warm temperatures. Cherries have a limited growing season and any fresh cherries grown in the United States sold after August probably came from cold storage. Small quantities of sweet cherries are imported from New Zealand during the winter months, but these may be difficult to find.

At the market, pick a handful of cherries at a time and only select the best fruit. This may be time-consuming, but the reward will be better cherries. Good cherries should be large (one inch or more in diameter), glossy, plump, hard and dark-colored for their variety. Buy cherries with stems on — they should be fresh and green. Reject undersized cherries or those that are soft or flabby. Avoid fruit that is bruised or has cuts on the dark surface.

If you find many damaged fruits at the market, consider buying cherries somewhere else, as a number of spoiled cherries will start the others to decay.

Retrieved from "https://healthyrecipes.fandom.com/wiki/Cherry?oldid=16031"
Community content is available under CC-BY-SA unless otherwise noted.