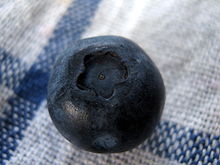 Blueberries are flowering plants of the genus Vaccinium (a genus which also includes cranberries and bilberries) with dark-purple berries and is a perennial. Species in the section Cyanococcus are the most common fruits sold as "blueberries" and are mainly native to North America. They are usually erect but sometimes prostrate shrubs varying in size from 10 centimetres (3.9 in) to 4 metres (160 in) tall.

Blueberries are sold fresh or processed as individually quick frozen (IQF) fruit, purée, juice, or dried or infused berries which in turn may be used in a variety of consumer goods such as jellies, jams, blueberry pies, muffins, snack foods, and cereals.

The fruit is a berry 5–16 millimetres (0.20–0.63 in) diameter with a flared crown at the end; they are pale greenish at first, then reddish-purple, and finally indigo when ripe. They have a sweet taste when mature, with variable acidity. Blueberry bushes typically bear fruit in the middle of the growing season: fruiting times are affected by local conditions such as altitude and latitude, so the height of the crop can vary from May to August depending upon these conditions.

Maine produces 25% of all lowbush blueberries in North America, making it the largest producer in the world. Maine's 24,291 hectares (60,020 acres) (FAO figures) of blueberry were propagated from native plants that occur naturally in the understory of its coastal forests.

Canadian exports of blueberries in 2007 were $323 million,[clarification needed] the largest fruit crop produced nationally, occupying more than half of all Canadian fruit acreage.

Retrieved from "https://healthyrecipes.fandom.com/wiki/Blueberry?oldid=8596"
Community content is available under CC-BY-SA unless otherwise noted.