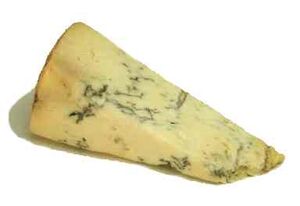 Blue cheese (or bleu cheese) is a general classification of cow's milk, sheep's milk, or goat's milk cheeses that have had Penicillium cultures added so that the final product is spotted or veined throughout with blue, blue-gray or blue-green mold, and carries a distinct smell. Some blue cheeses are injected with spores before the curds form and others have spores mixed in with the curds after they form. Blue cheeses are typically aged in a temperature-controlled environment such as a cave.

In the European Union many blue cheeses such as Roquefort, Gorgonzola and Stilton are like wine, in that they carry a protected designation of origin, meaning they can bear the name only if they have been made in a particular region in a certain country. Similarly, individual countries have protections of their own such as France's Appellation d'Origine Contrôlée and Italy's Denominazione di Origine Protetta.

The characteristic flavor of blue cheeses tends to be sharp and a bit salty. The smell of this food is widely considered to be pungent. This is due to the types of bacteria encouraged to grow on the cheese; for example, the bacterium Brevibacterium linens, responsible for the pungent smell of many blue cheeses, is also the cause of human foot odor. Due to this strong smell and flavor, blue cheeses are often considered an acquired taste. They can be eaten by themselves or can be crumbled or melted over foods. Adding cheese can improve many soups or stews.

Retrieved from "https://healthyrecipes.fandom.com/wiki/Blue_cheese?oldid=18940"
Community content is available under CC-BY-SA unless otherwise noted.