Beans can be divided into a few categories: fresh beans, dry beans and snap beans. Many varieties of bean can be used at several stages of development and so, fall into several of these categories depending on when they are harvested.

Fresh beans appear in the summer and fall, and they're sweeter and more tender than dry beans. They're also easier to prepare, since you don't need to soak them or cook them very long. Examples of popular fresh beans include: fava beans, lima beans, edamame and cannellini beans, to name just a few.

Dry beans are beans which have been allowed to mature fully on the vine before being harvested. They are then removed from their pods and stored. They require soaking before being used in cooking. Many of these are available pre-cooked, in cans. Examples of popular dried beans include: kidney beans, pinto beans, black beans, black-eyed peas, Soya beans to name just a few. 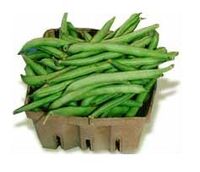 Snap beans, also known as green beans, or string beans are beans which are harvested relatively early in the ripening process so that the bean pods are still tender and edible. Examples of popular snap beans include: French beans, wax beans, and yard-long beans.

There's no clear botanical difference between beans and peas.

What about soy? They're round when you buy them dry. They're bean shaped after they've been soaked and after they're cooked. They're called soya beans.

Retrieved from "https://healthyrecipes.fandom.com/wiki/Beans?oldid=18709"
Community content is available under CC-BY-SA unless otherwise noted.