The Globe Artichoke (Cynara cardunculus) is a perennial thistle originating in Southern Europe around the Mediterranean. It grows to 1.5–2 m tall, with arching, deeply lobed, silvery glaucous-green leaves 50–82 cm long. The flowers develop in a large head from an edible bud about 8–15 cm diameter with numerous triangular scales; the individual florets are purple. The edible portion of the buds consists primarily of the fleshy lower portions of the involucral bracts and the base, known as the "heart"; the mass of immature florets in the center of the bud is called the "choke". These are inedible in older larger flowers.

Anicent Romans used to eat artichokes to balance the effects of excessively rich foods, fats and wine that led to liver issues and gout. The artichoke is high in fiber, calcium, potassium, phosphorus and other trace elements including iron. Artichokes are known to aid liver function, arteriosclerosis and supports the effectiveness of gall secretions.

Artichoke hearts are the tender inner portion beneath the leaves of globe artichokes. They are available canned, in jars and frozen. 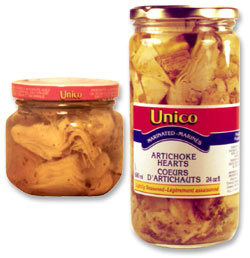 High-quality artichokes are usually compact and heavy for their size. Squeezed, a fresh artichoke will make a squeak. The thickness of each stalk should correspond to the size of the artichoke. Thin stalks signal dehydration, so look for stalks that are firm without ‘give.’

Artichokes remain fairly constant in appearance for weeks, but flavor is adversely affected from the moment they are cut from the stalk. For maximum taste and tenderness, cook as soon as possible. Do not stock up on artichokes. Refrigerate unwashed, in a plastic bag, for up to 1 week.

Artichokes should be washed under cold running water. Pull off the lower petals and cut the stems to one inch or less. The stems can be left longer but will need to be peeled to remove thick fibers. Cut the top quarter of each artichoke and snip off the sharp tips. Artichokes turn brown very quickly once they are cut. To preserve the green color, one may dip in lemon water.

Artichokes can also stain the hands quite badly so it is recommended that rubber gloves be worn for cleaning and chopping.

Artichokes can be boiled, steamed, microwaved or sautéed. They can be eaten whole or added to other dishes.

Cooked artichokes may be refrigerated for several days in a covered container.

Microwave: cook 6 to 8 minutes or until a petal near the center pulls out easily.

Steaming:Cut about an inch off the top of each artichoke.

Stir-frying: Although most expert chefs recommend not to stir-fry Artichoke, there are still several dishes in which this cooking method produces extremely tasty results. While this is not the healthiest method of preparing Artichoke you can still preserve most of its nutrients by keeping cooking time short. A few minutes of stir-frying may do the trick and you will get a good balance between a tastier fried taste and a reasonable level of intact nutrients.

To eat, pull off leaves and eat the fleshy ends attached to the plant. Lift out the cone and cut out the core, which is the fuzzy portion at the center. The heart is a true delicacy and will break easily with a fork. Dip the leaves in lemon juice or try the low-fat dipping sauce in the recipe section.

Retrieved from "https://healthyrecipes.fandom.com/wiki/Artichoke?oldid=16201"
Community content is available under CC-BY-SA unless otherwise noted.